Unlike the daytime appearance, the nighttime appearance also transforms into another traditional atmosphere, and Kyoto at night shines with fantastic beauty and brilliance that makes you feel as if you are in another world.

We would like to introduce shrines, temples, where light-up events are taken place, and other sightseeing spots that you should go at night.

Also, flying drones in the sky of Kyoto city is strictly prohibited, and aerial photography and flights of drones without permission and certification are subject to punishment.

About a flight rule of an unattended airplane (drone radio control)

Toji temple, is five-storied pagoda, has been built in 796 after relocation of the capital called Heiankyo and the temple remains almost the same as it was when it was built.

A fantastic view of the temple makes you feel as if you have traveled back in time to Heiankyo period.

Also, during the spring and autumn leaves season, they have a special nighttime visit, and with the size of Toji temple, there is no doubt that you will be overwhelmed by the scenery of Somei-Yoshino, a type of tree of cherry blossoms, and autumn leaves.

The Nijo castle was used as a court and lodging in the Edo period, and was registered as UNESCO “Historic Monuments of Ancient Kyoto” in 1994.

In collaboration with the creative production named “NAKED”, the castle was colored with light art with various themes such as cherry blossoms in spring, autumn leaves and pampas grass ears in autumn, fireworks, soap bubbles, Kaleidoscope and even Japanese Specter.

The Nijo castle has a different world that you cannot think of as a castle.

Yasaka shrine is the headquarter of the faction of Yasaka shrines all over Japan, and is called “Gion-san”. Calling someone or something with “-san”, as honorific title, means that familiarity is attached to it.

The magnificent vermilion gates called Nishi-rou-mon and the ritual stage with plenty of lanterns are lit up at night, the shrines are still powerful and majestic even though the shrine is surrounded main streets and modern buildings.

This shrine is highly recommended because there is no admission fee and curfew for the shrine, so it is available anytime.

Chion-in is featured with the giant gate called San-mon, long stairs with 51 steps called Otoko-zaka toward the main fall of the temple called Miei-dou. Their religion is Jodo sect (Pure Land Buddhism) and this temple is the headquarter of the Pure land Buddhism temple in Japan.

There is another route, called Onna-zaka, where its slope is gentle, and it leads you to the main hall as well.

During the special nighttime opening, you will have an opportunity to listen to wisdom story by monks there, to hit a mokugyo, a fish-shaped wooden drum used for Buddhism chants, and to have a special tour with the monks.

The giant gate called San-mon was lit up with blue light in order to encourage health care workers in 2020.

Their nighttime events use projection mapping for whole area of the temple, you can enjoy the events from the beginning to the end.

After coming though the giant gate, the long stairs lit up by the projection mapping.

Ninen-zaka and Sannnen-Zaka are long stairs in Higashiyama area, where there are a lot of traditional souvenir shops opening in the daytime. It is very famous to wander around the area with Kimono or Yukata style (Japanese traditional close culture)

Such lively approach also transforms into a place that gives off a different charm at night.

Great view of the Yasaka Pagoda

Nearest bus stop: Gojo-zaka bus stop by Kyoto city bus No.206 or 86, then go up a slope called Gojo-Zaka. You will find first Sannen-Zaka, then Ninen-Zaka and Yasaka Pagoda in order.

Kiyomizu temple is one of the best temples in Kyoto, which is famous for “the stage of Kiyomizu”, and is registered as one of the World Heritage Sites “Historic Monuments of Ancient Kyoto”.

Also this temple is well-known as where “Kanji of the year” that expresses the whole year with one character of Kanji by the monk from the Kiyomizu temple.

Kiyomizu-temple’s special nighttime opening event are held three times in spring, summer, and autumn, so you can enjoy different faces in each one of the season.

The light emitted from Kiyomizu-dera is divine, and the harmony with the historical buildings is wonderful.

The stage of Kiyomizu temple with autumn leaves and the shine.

※Since the special nighttime opening hour is extended from the regular viewing time, the admission fee is needed to pay only once.

Fushimi Inari Taisha Shrine, which is famous for Senbon Torii(thousand of gates), has been built in 711. Praying at the shrine benefits you of prosperous business and family safety.

It is the headquarter shrine of Inari shrine group, which has about 30,000 companies nationwide, and is one of the best power spots in Japan, and many people visit it at the beginning of the New Year.

Around the main gate called Rou-mon, two statues of fox are enshrined. The more you walk into the area, the more you can meet the fox everywhere who is the messenger of the god of Inari.

By the way, Ema (絵馬:message wooden board to writes your wish to send them to the God) is also very unique because it imitates the face of a fox.

The original belief in worshiping the Inari Shrine is to walk around the entire mountain where the main shrine is enshrined, but many people come back around the area called Mitsutsuji or Yotsutsuji on the halfway to the top.

In the nighttime, it is completely different atmosphere from the daytime around the shrine and the mountain, so you may feel a little bit thrilling and spooky but the area attracts visitors by another kind of beauty of the night.

Kawa-doko(or Kawa-yuka), which is famous as one of the summer traditions of Kyoto, is also called Noryo-Yuka, and is a traditional Kyoto culture that has continued since the Edo period (was restricted during the Pacific War period).

Just looking at the view of the Kawa-doko floors from the Kamo River side is a wonderful but it is much worth having dinner on Kawa-doko floor and looking down the river view.

This Noryo Yuka period starts from 1st May and ends 30th September. ※This Noryo Yuka was held between 1st May to 31st October in 2021 as the association extended the period.

Hanamikoji dori is a street lined with good old Kyomachiya(京町屋:traditional Japanese house architecture ) in Kyoto, which is characterized by Bengara-Koshi(紅殻格子: a red shell lattice) and Inuyarai(犬矢来: The fence under the eaves of the dog guard).

There are many Ochaya(お茶屋: a place where guests enjoy their meal with Geiko and Maiko performers) near this street, and if you are lucky, you may see Geiko and Maiko heading to the Ochaya.

※Please note that taking pictures on private roads other than Hanamikoji-dori, talking to Geiko and Maiko, or taking pictures without permission is strictly prohibited and will be subject to fines.

Gion Shirakawa river is located east of Gion Shijo. It is not a big area, but the area is fulfilled with a lot of charm of Kyoto tradition and it is a place where you can have it all of the Kyoto tradition at once.

The area shows various changes such as cherry blossoms in spring, fresh green in summer, autumn leaves of ginkgo and zelkova in autumn, and snow makeup in winter. Many people wear Kimono and Yukata and take a walk while enjoying the seasons and atmosphere.

Kyoto’s Hanamachi “Miyagawa-cho” is one of Kyoto Gokagai(京都五花街: a general terms of five Intangible cultural heritage town in Kyoto) of Kyoto, and the Miyagawa-cho is where the history and culture that has been nurtured and developed together with Kabuki, Geiko and Maiko. Various events are held throughout the year, so if you are interested, why not take a look at the art of Kyoto.

In addition, it is designated as a landscape conservation area, and it is a town that retains the old-fashioned atmosphere. After the sunset, not only the streetlights but also the lanterns attached to the front entrance shine dimly, which is breathtakingly beautiful.

Lanterns shine at night in Miyagawa-cho.

Photogenic spots in the Mt. Fuji area as recommended by locals!
Gorgeous all year round, but especially in autumn – the still beauty of Shosenkyo Gorge 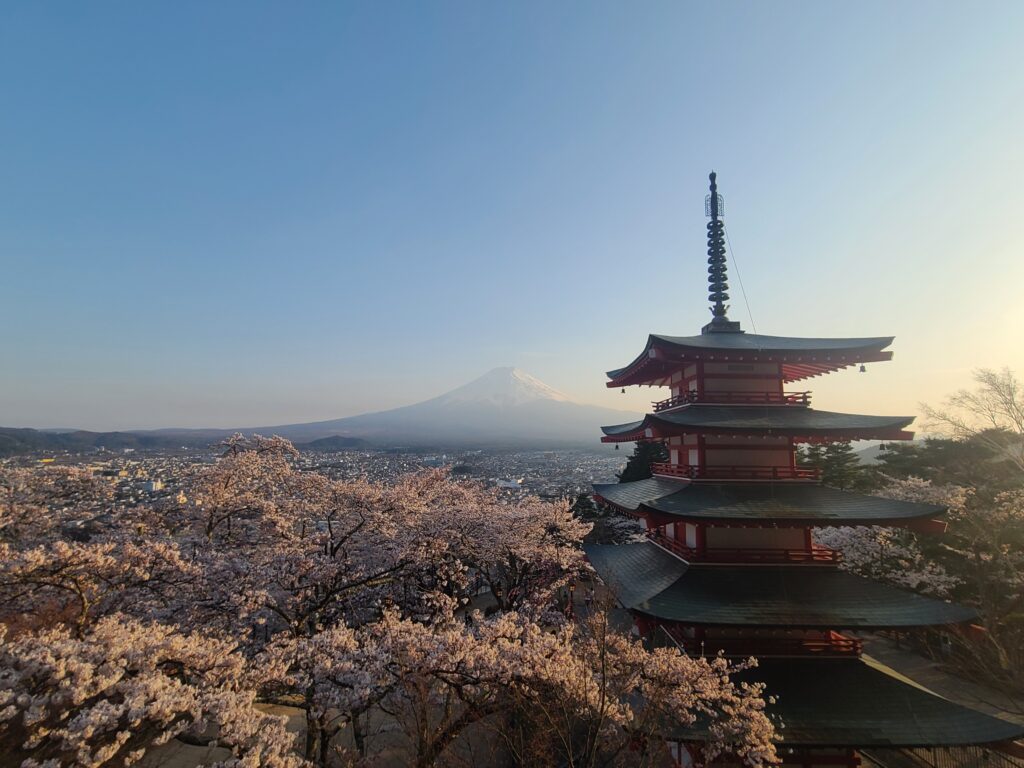 3 recommended hikes in Kyoto
Now is the best time to visit Japan! Japan is super cheap now
2022【Go as many time as I want】 Autumn Leaves in Kyoto
7 recommended spots in Kyoto to enjoy with children！
【2022】Natural hot springs and bathhouses in Kyoto